With less than 3 days to go before the start of the 2017-2018 NBA season, it’s time for all the fans around the world to think about who they believe will be voted into the All-Star Game, win MVP, Sixth Man of the Year, etc. What kind of NBA blogger would I be if I didn’t partake in this discussion myself. Here are my predictions for all NBA awards:

Currently Kawhi is the best two-way player in the NBA and in my own opinion, he’s the best player in the world today. In the past 2 seasons he finished within the top 3 for the MVP voting. This year he will breakthrough and become the league’s next MVP as he leads the Spurs to a top 3 record in a stacked Western Conference. Before he was injured by the infamous Zaza Pachulia closeout in Game 1 of the Western Conference Finals against the Warriors he scored 26 points in just 23 minutes and was the main factor to the Spurs leading by 21 points up to that point. Once he left the game with a little less than 8 minutes left in the 3rd the Spurs gave up the lead and ended up losing that game along with the next 3 getting swept out of the playoffs. It’s still scary to think what could have been if he remained healthy throughout that series. Leonard will look to improve off of last season as he has done each season of his career. There is a quad injury currently holding Kawhi back from playing and he will miss the season opener although if he can get back to 100% early in the season and maintain a healthy season, the 2017-2018 MVP award will be an addition to his Finals Championship and Finals MVP accolades.

Rookie of the Year: Lonzo Ball

The 2nd overall pick has the highest level of expectations that any player has had on their shoulders since Lebron James was drafted in 2003. With Lakers President Magic Johnson already calling him ‘the face of the organization’ and dubbing Lonzo as the team’s immediate leader before he even played a single game speaks volumes of the weight Lonzo will be carrying throughout the course of his rookie season. Ball won the Summer League MVP leading the Lakers to become the Summer League champs while doing all there is to do to fill the stat sheet. Ball averaged 16.3ppg, 7.7rpg, 9.3apg, 2.5spg, and 1bpg through 6 games played. Yes, he wasn’t necessarily competing against top-tier NBA talent but if Ball continues to work on improving his game (especially his jumper as he has yet to find a rhythm) then he will indubitably commit those averages against the best players in the world.

Lou Williams was having a career year last season averaging a career high 18.6ppg with a 44% field goal percentage (38.5% from 3 which is also a career high). He was traded to Houston from the Lakers right before the trade deadline, pairing him with Eric Gordon who is now our current Sixth Man of the Year and that ultimately ruined Williams’ shot at the award. He scoring fell to 14.9ppg and his accuracy took a slight dip as well with a 38% field goal percentage. Now that he’s back in LA with the Clippers who will need good scoring contribution from their second unit, this award is Lou Will’s to lose and he definitely will not let it happen for a second straight year. Williams will bring back the scoring heat he had last year with the Lakers and will be the most prolific scorer off the bench in the NBA this season.

As the defensive anchor and soul of the best team in the league, it’s hard to bet against Draymond. Initially I was favoring Rudy Gobert for DPOY but with the Jazz losing Gordon Hayward they will need more offensive production from Gobert and that will take up more of his energy. Draymond is not known for his offensive prowess but with a team that is heavily armed with offensive weapons, it’s not like he needs to focus on scoring anyway. Green can guard all positions on the floor well with great lateral movement and the will to sacrifice his body and energy on that end of the floor so that players like Durant and Curry can solely focus on running the offense, scoring the ball at a high rate. Draymond will enter this season right where he left off from last season as the best defensive player in the league on the best defensive team in the league. 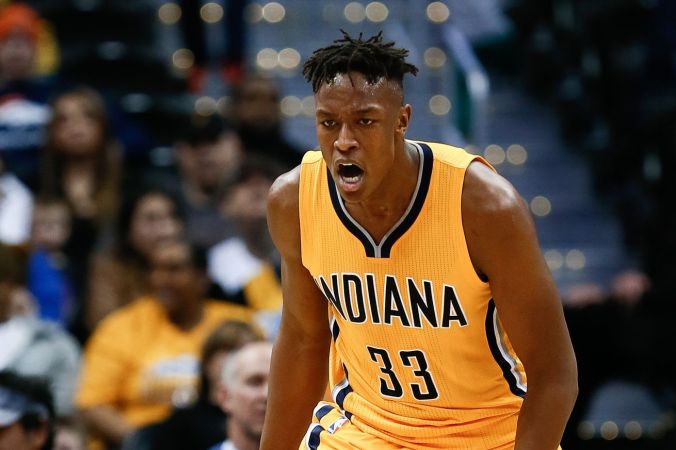 Paul George’s exit from Indiana paves the way for Myles Turner to have a breakout season this year. From his first season to his second, Turner improved in every statistical category while being used less than he was during his rookie season. Turner has the potential to be one of the best centers the NBA has to offer due to his effectiveness defensively and his ability to stretch the floor offensively. As the Pacers’ new number one option, this is the year for him to advertise his skillset and prove his true value in this league. I expect Turner to jump into the talks of being a top 10 center in NBA during his 3rd season averaging more than 20ppg, 10rpg, and 2bpg.

Coach of the Year: Billy Donovan

Thanks to Sam Presti, Coach Donovan has been blessed with 2 more All-Stars to give Russell Westbrook more help on the court. But adding All-Stars to a team does not automatically make them better. They still have to learn how to play together successfully and the coach has to be able to develop a playbook and game plans that allow each player to use their skillsets in ways that help the team win on a consistent basis. The Thunder were able to conjure up 47 wins and land the 6th seed and Russell Westbrook made history all throughout the season the year after Kevin Durant left via free agency. For a team to bounce back the way the Thunder did after their best player switches teams is remarkable. Westbrook’s play was an absolute factor to the team’s success but I’m giving coaching just as much if not more credit. Now with an improved roster, the pressure is on even more for Billy Donovan to lead the Thunder to a more successful season during the season and postseason. This will be a fun season for the Thunder and Billy Donovan will be rewarded with the accolade that is Coach of the Year.